Dr. Hiroki Ito is one of the authors of the abstract “Novel model of micturition based on a multi-unit recordings of optogenetically-identified Barrington’s CRH neurons in mice”, which won the EAU20 Best Abstract Award Non-Oncology. This article reflects its highlights.

It is a great honour for me to be offered such an opportunity at EAU20. I am a trainee Japanese urologist with an academic interest in bladder dysfunction. This was initiated with my PhD studies in the laboratory of the Department of Continence Medicine at the University of Tokyo (JP). These studies focussed on the functional physiology and pharmacology of bladder control, especially in relation to ageing in rodent models. When I came to the end of my PhD, I was looking for opportunities to develop my interests. I was so excited to find a postdoctoral position in Bristol (GB)! I could study the effect of phosphodiesterase type-5 inhibitors on lower urinary tract symptoms as part of an NIH-funded collaboration with the team of Mr. Tony Kanai in Pittsburgh (US). Thus, I, my wife, and our 1-year-old son all came to Bristol.

The PDE5i research went well, and I published several interesting papers1-3. I also developed the decerebrate arterially perfused mouse preparation (DAPM). I was busy, but I also got interested in the neuroscience of bladder control (obviously influenced by Professor Drake and Pickering). This is a strange world for a clinical urologist, but I was keen on using some of the amazing new tools and methods to genetically target and control discrete populations of neurons, which were employed by other people in my research group.

We decided to try and investigate how Barrington’s nucleus in the brainstem controls micturition. Therefore, we used optogenetics to selectively activate those neurons in vivo with light in a CRH-Cre mouse line. Thanks to the genetically modified mice, we could use a viral vector to express channelrhodopsin-2 in those neurons. We showed that these neurons could control bladder pressure and could sometimes produce a void but only when the bladder was filled. This seemed to be a probabilistic process, which is not typically how a ‘command neuron’-controlled voiding should work.

Team effort
To explore this further, we needed to engage in the most challenging part of these experiments: recording Barr-CRH firing activity from optogenetically identified neurons using multisite silicon probes. This was a team effort with my colleague Dr. Anna Sales (GB), who had developed the approach in our lab. I found that an inaccuracy of only a few microns at the probe site already made a huge difference in the recording, imposing tearful patience on us. However, we succeeded in obtaining enough data to build a novel model of voiding that recapitulates many of the observed features of our data. This suggests that Barrington’s nucleus makes repeated inferences about the state of bladder fullness (by generating non-micturition contractions) and only generates the explosive void when the bladder is sufficiently full. This is shown schematically in the figure. 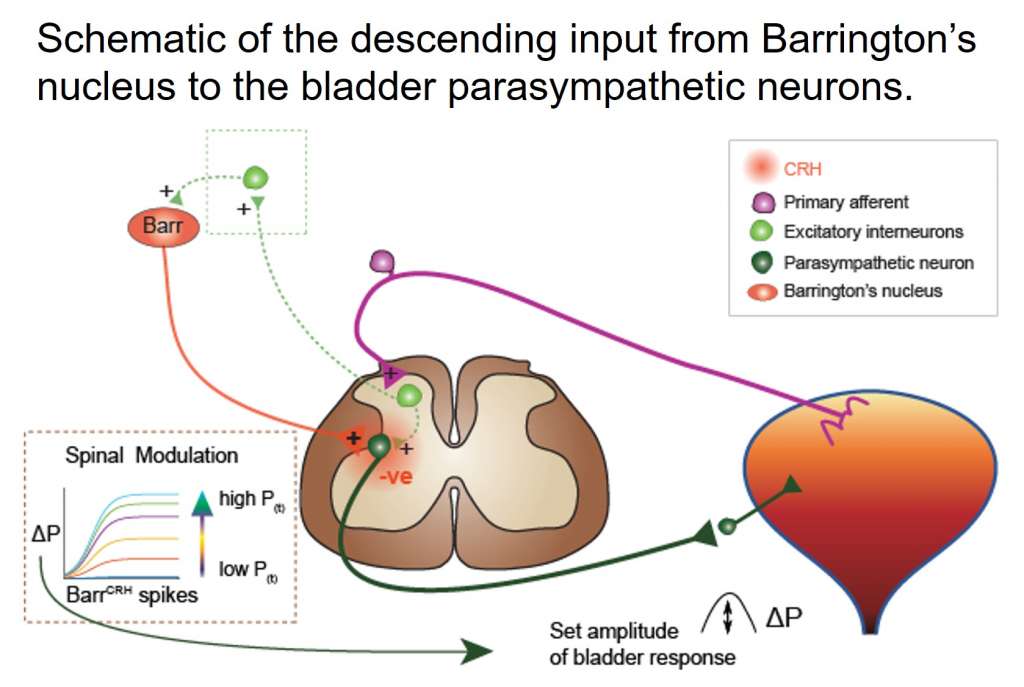 Personal and private success
My three years in Bristol brought me and my family a lot: extraordinary professors (Tony Pickering, Marcus Drake, and Chris Fry, all GB), helpful lab mates with huge diversity, the profound world of neuroscience, lab meetings on the beautiful lawn (only in the short summer), and my lovely daughter! We also learnt that trains do not always arrive on time and that British beer can be a challenge if you do not have the correct isoform of alcohol dehydrogenase. And now, to put the cherry on the cake, I was awarded with the first prize for the Best Abstract (non-oncology). I would like to thank the EAU committee for being so broad-minded in their selection, my colleagues and friends in Bristol, and my family, who have been so supportive.

Sign up now for EAU20 Virtual to attend Dr. Hiroki Ito’s, and other abstract winners’, presentation this Saturday!