Dr. Paul Sargos and Dr. Igor Latorzeff are two of the authors of the abstract “Late toxicity and quality of life from GETUG-AFU 22 study: A randomized phase ii trial comparing 6 months of degarelix in combination with radiotherapy to radiotherapy alone for patients with detectable PSA after radical prostatectomy,” which won the second prize in the EAU20 Best Abstract Awards Oncology. This article reflects its highlights.

Radical prostatectomy (RP) can provide good long-term oncological outcomes in patients with localised prostate cancer (PCa)1. After RP, prostate-specific antigen (PSA) represents the cornerstone for follow-up of patients and it is expected to be undetectable within 6 weeks of RP.

Ploussard et al.2 showed that approximately 75% of patients with persistent PSA could present a biochemical recurrence. Moreover, persistent PSA represents a common finding early after RP (in 8.8% of cases) and is associated with worse oncological outcome after RP3. For patients with detectable PSA after radical prostatectomy, the GETUG-AFU 22 study, a multicentre randomised phase II trial, compared 6 months of degarelix in combination with radiotherapy (RT) to RT alone as a salvage treatment (NCT01994239). The primary endpoint was event-free survival. During the EAU20 Virtual Congress, Dr. Paul Sargos, radiation oncologist at the Bergonié Institute in Bordeaux (FR), will present the toxicity (CTCAE V4.0) and quality of life (QLQ-C30 and PR-25) results.

In this study, patients with localised PCa, treated by RP, with a PSA level post-RP ≥ 0.2 ng/mL and ≤ 2 ng/mL at randomisation and N0 M0 on imaging were included. The design of the study is presented in Figure 1.

At 2 years, QoL was evaluated in 59% of patients in the RT arm and 77% in the RT+HT arm. Interestingly, no difference in QLQC-30 or QLQ-PR25 analysis was reported. This study highlights the good tolerance of post-operative radiotherapy. In this direction, the GETUG-AFU 16 study4 aimed to establish the effect of adding 6 months of androgen suppression at the time of salvage RT on biochemical outcome and overall survival in men with rising PSA following RP. In this positive trial, 3 (8%) of 366 patients had grade 3 or worse hot flushes and one patient had grade 3 or worse sweating in the RT plus goserelin group versus none of 372 patients in the RT alone group. 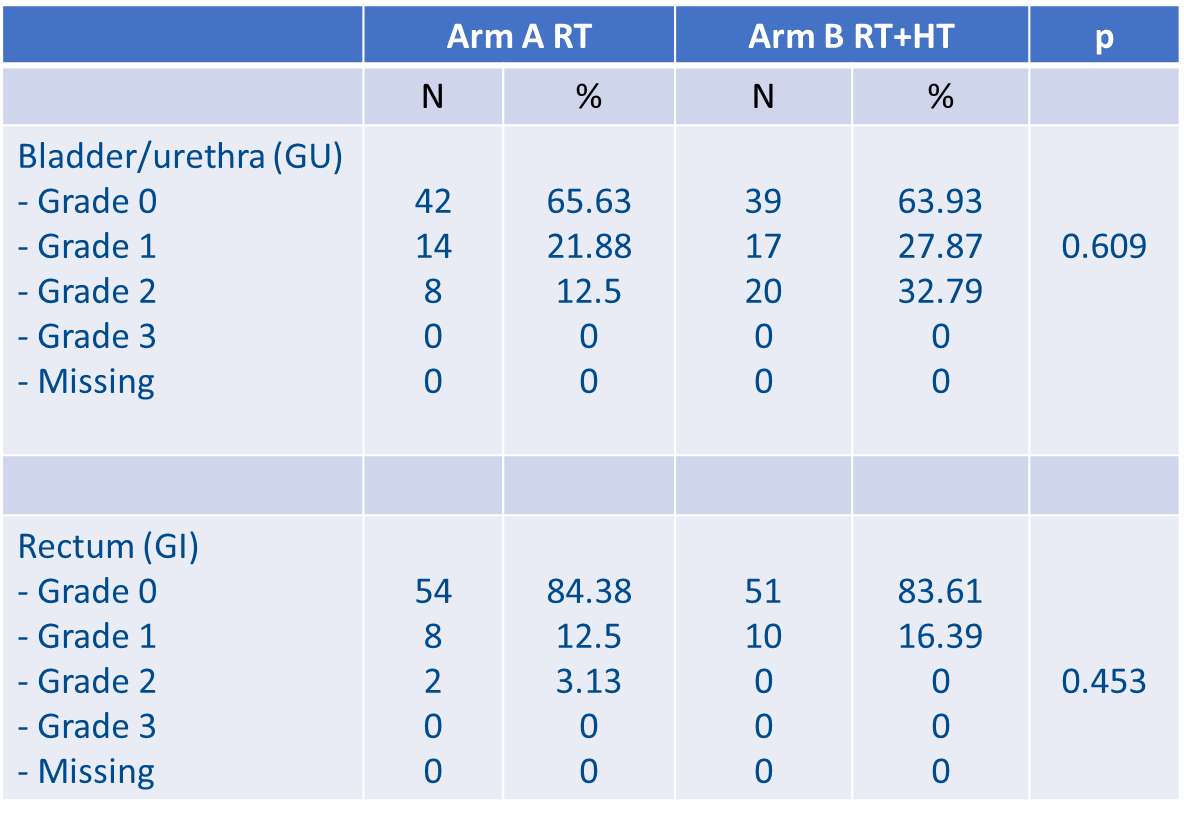 The most common late adverse events of grade 3 or worse were genitourinary events (29 [8%] in the RT alone group vs. 26 [7%] in the RT plus goserelin group), and sexual disorders (20 [5%] vs. 30 [8%]). On the other hand, our study demonstrates that 6 months of degarelix did not affect patient’s toxicity and QoL at two years.

Regarding efficacy, the 10 year results of the GETUGAFU 16 trial confirmed the benefits of androgen suppression plus RT as salvage treatment in patients with increasing PSA concentration after RP. Can these results be extrapolated to patients with persistent PSA after RP, the population explored in the GETUG-AFU 22 trial? Preisser et al. demonstrated in a multivariable analysis that persistent PSA remained an independent predictor for metastasis (HR: 3.59, p < 0.001), death (HR: 1.86, p < 0.001), and cancer-specific death (HR:3.15, p < 0.001). Patients with persistent PSA after RP appear to have a survival benefit when they received salvage RT3. The results from the GETUG-AFU 22 study, evaluating efficacy, are expected in 2020 and will help clarify the appropriate approach of salvage RT with or without androgen suppression in this population of patients with detectable PSA after RP.