This article reflects the highlights of the lecture Prof. Marek Babjuk gave at the EAU20 Virtual Congress on Saturday 18 July. His presentation can be found in the EAU20 Resource Centre.

Bladder cancer is the ninth most diagnosed cancer worldwide, and approximately 430,000 new cases were reported in 2012. In the European Union, the age-standardised incidence rate is 19.1 for men and 4.0 for women1. Approximately 75-85% of all patients with bladder cancer have mucosa-confined disease (stage Ta or stage carcinoma in situ (CIS) or submucosa (stage T1)). This group of tumours is referred to as non-muscle-invasive bladder cancer (NMIBC) as opposed to muscle-invasive disease staged as T2-T4.

NMIBC comprises tumours with extremely heterogeneous biological behaviour and natural history. After complete endoscopic resection, up to 80% of patients will develop tumour recurrence with 2-50% showing stage progression. At one end of the spectrum, low-grade Ta tumours show a high recurrence rate, but rarely represent a threat to the patient. At the other extreme, high-grade T1 tumours show high progression and death rates. The success of treatment for NMIBC depends on the biological characteristics of the tumour and on correctly selected and performed treatment.

The current recommendations for the management of NMIBC are summarised in the European Association of Urology (EAU) guidelines2. The philosophy is based on the following principles:

Prediction of tumour behaviour and risk stratification
Prediction of the risk of disease recurrence and progression is crucial in the management of NMIBC. The best available clinical prognostic tool for patients with NMIBC is the European Organization for Research and Treatment of Cancer (EORTC) prognostic model and risk tables which were developed in 20063. They are based on data from 2,596 patients diagnosed with TaT1 tumours who were randomized in seven EORTC trials. The system can predict both the short-term and long-term risks of recurrence and progression in individual patients. The scoring system is based on the six most significant clinical and pathological factors:

A similar model which predicts the risk of recurrence and progression in patients treated with BCG has been published by the Club Urológico Español de Tratamiento Oncológico (CUETO) (the Spanish Urological Oncology Group)4.

For practical reasons and to allow treatment recommendations, the individual prognosis is translated into risk group stratification. Patients with NMIBC are separated into a low-risk, intermediate-risk and high-risk group (see table 1). This stratification is based on clinicopathologic parameters and considers the EORTC risk tables’ probabilities of recurrence and, especially, progression.

All necessary data to include patients in a risk group can be obtained from the patient history, cystoscopy, TURB, and histological evaluation of resected tissue. This underlines the role of carefully and correctly performed diagnostic steps, particularly TURB.

High-risk group
In the high-risk group all patients with either T1 tumour, G3/HG, or CIS are included. Several TaG2/LG tumours with unfavourable features (multiple, large, and recurrent tumours) are also included. The risk of progression in high-risk tumours is significant (17-45% at 5 years according to EORTC tables), but even this group contains tumours with very heterogeneous behaviour. Although BCG intravesical instillations are a very effective therapy, about one third of high-risk tumours progress to muscle-invasive disease. About 11% of patients eventually die because of bladder cancer in spite of BCG5. All efforts should be aimed at identifying patients with unfavourable prognosis (= highest risk patients) as soon as possible.

The highest risk group is comprised of the following patients: 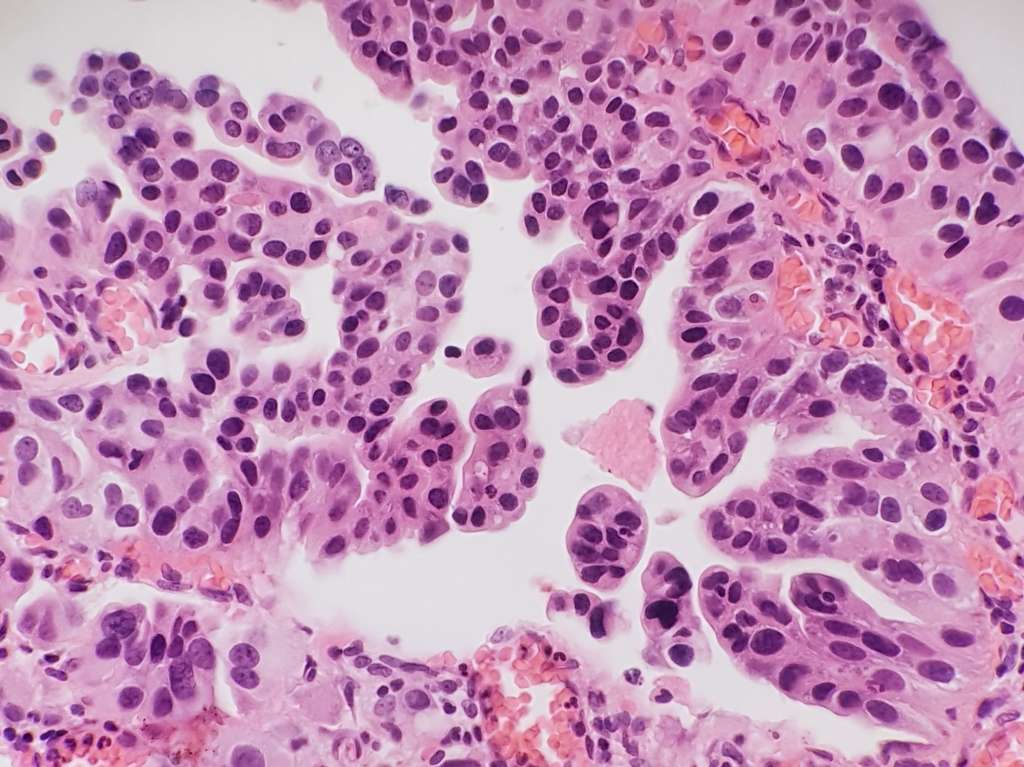 BCG failures and BCG unresponsive tumours
BCG is nowadays the most effective intravesical treatment for high-risk NMIBC. It is, however, very important to specify tumours that do not respond despite adequate BCG treatment and can progress in the near future. Non-muscle-invasive tumours presenting after BCG can be categorised into BCG-refractory, BCG-relapsing, BCG-unresponsive, and BCG-intolerance (see table 2). The definitions are based on stage and grade of persistent or recurrent lesion, on adequacy of previous BCG treatment, and on the interval after the last BCG instillation2.

The updated definition of BCG-unresponsive tumours was introduced recently to denote a subgroup of patients at higher risk of progression in whom further BCG most likely does not cure the patient11. This definition was developed in consultation with the FDA to allow for single-arm trials to provide primary evidence of effectiveness to support a marketing application since no effective therapy is available for BCG-unresponsive NMIBC.12 According to this analysis, patients who fit this definition are more likely to require salvage radical cystectomy (in 54.5%) and are less likely to remain without tumour recurrence (only 23%).13 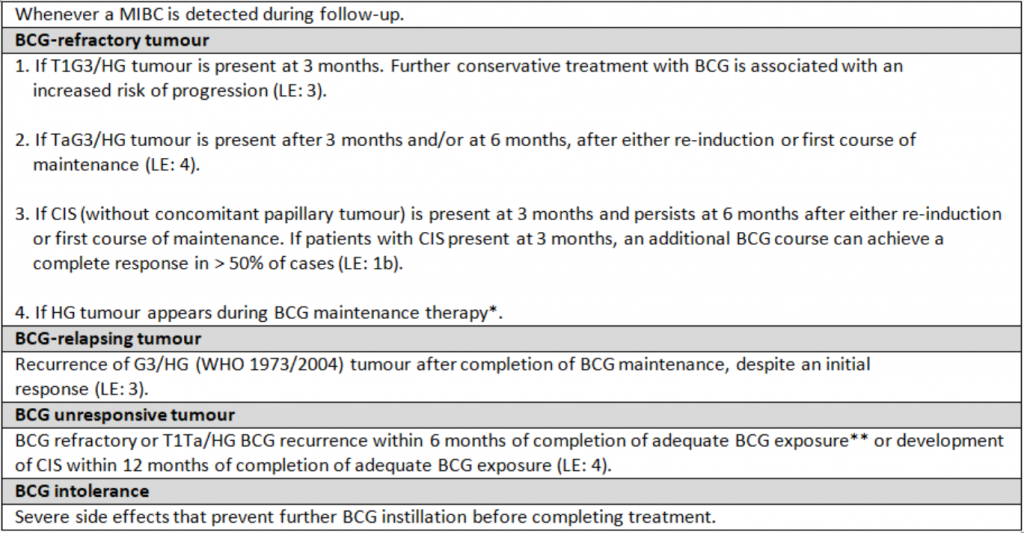 Future trends
The prognosis prediction and patient stratification is currently based on clinicopathological parameters, but this approach has several limitations. The factors considered are subject to interobserver variation; they cannot predict individual course of disease nor response to different treatment modalities.

Molecular subtyping holds great promise in understanding the disease and in personalised therapeutics. Although it is currently discussed mostly in association with muscle-invasive tumours, it will probably play a role in the future treatment of high-risk non-muscle-invasive tumours because of its biological similarities with invasive lesions.14,15