This article reflects the highlights of the lecture Dr. Ursula Vogl will be giving during “Thematic Session 10: Immunotherapy in urothelial cancer” at EAU21 Virtual. This session is taking place in Virtual Room 2 on Saturday 10 July, 15.15 – 16.15 CEST.

Bladder cancer is one of the most diagnosed cancers worldwide, with an age standardised incidence rate of 9.5/100,000 in men and 2.4/100,000 in women in 2020. [1] Although the introduction of new drugs, most importantly immune checkpoint inhibitors (ICIs), in the treatment landscape of metastatic urothelial cancer (mUC) has improved the prognosis in some regions with unlimited access to ICIs, mortality rates in Europe for 2030 are expected to increase by as much as 20% [2]; however, a recent article announced an expectation of a reduction in the bladder cancer death rate in the USA: a reduction of 10,000 cases by 2040 from 2020 levels, to be precise. [3] New agents and strategies like the antibody drug conjugates (ADC) enfortumab vedontin [4] and sacituzumab govitecan [5], as well as switch maintenance with an anti-PDL-1 antibody, are expected to significantly improve the overall prognosis in this highly aggressive disease. [6]

Immunotherapy after failure of platinum-based chemotherapy
The first revolutionary step towards an improvement of the prognosis of our patients with mUC came with the data of anti-PD-1 and anti-PDL-1 drugs in second-line therapy after failure of platinum-based chemotherapy (CHT). Of 5 ICIs, three (pembrolizumab [7], atezolizumab [8] and nivolumab [9]) have received approval from the European Medicines Agency (EMA) with a level-IA evidence only for pembrolizumab, reporting positive overall survival (OS) improvement in a phase-III trial [7] compared to chemotherapy with paclitaxel, docetaxel, or vinflunine. The question arises, “Who will respond to these immune-oncology drugs?” But even in 2021, four years after the first positive phase-III trial, this question remains unanswered.

PDL-1 expression after platinum-based CHT failure does not give us guidance on the patient population that would benefit the most. There have been attempts to study the prognostic models already established for CHT. Two atezolizumab trials were pooled and a post-hoc analysis was performed to create and then validate a prognostic model for patients receiving this PDL-1 inhibitor (IMvigor210: n=310 [8], phase1a PCD4989g n=95 [10]). Six risk factors were identified (higher ECOG, elevated platelet count, presence of liver metastasis, elevated LDH, increased lymphocyte neutrophil ratio, and anaemia). Patients with zero or one risk factor(s) had a median OS of 20 months, patients with more risk factors less than 3 months. This raises the question, “Should patients with a high score (four factors or more) even be considered for second-line treatment or should they receive best supportive care [11]?”

Immunotherapy in first-line cisplatin-ineligible patients
The second-line approval of checkpoint inhibitors (CPIs) pushed investigations and trial designs to the first-line setting, where there was a clear unmet need for improvement. Two phase-II trials in cisplatinineligible patients (IMvigor210 [12] and KEYNOTE-052 [13]) showed a remarkable progression-free survival (PFS) improvement that led to the approval for first-line cisplatin-ineligible patients. The authorisation was restricted to PDL-1-positive patients in some countries after the interim analysis of the IMvigor130 trial demonstrated a significantly worse performance of PDL-1 negative patients in the monotherapy arm with atezolizumab. At ASCO 2021, a five-year follow-up of the KEYNOTE-052 was presented, which demonstrated that patients with a CPS 10 had better outcomes (OS, duration of response and confirmed ORR), which underlines the necessity to reserve that treatment for cisplatinineligible patients with a high PDL-1 expression. [14] A post-hoc analysis of a subgroup from the IMvigor130, presented at ASCO GU 2021, reported an OS benefit (HR 0.53; 95% CI: 0.30-0.94) Arm B (Atezolizumab) vs. Arm C (platinum/gemcitabine) in atezolizumab-treated cisplatin-ineligible IC2/3 patients. [15]

Immunotherapy in first-line chemo-immuno and immuno-oncology combinations
The approval of CPIs in two treatment lines in mUC and the encouraging data of the triplet combination in metastatic lung cancer provided a rationale for similar trial designs in patients with mUC. Two three-arm randomised controlled phase-III trials, IMvigor130 and KEYNOTE-361 (platinum-based CHT plus anti-PD1/ PDL-1 vs anti-PD1/PDL-1 mono vs platinum-based CHT mono) showed disappointing results as they were not positive for OS improvement [16,17]. Similar in all these trials was the detrimental performance of the CPI monotherapy in the first weeks of treatment, with the typical infinity symbol shaping survival curves that showed inferiority of the IO monotherapy compared to platinum-based CHT in the PDL-1 negative groups. Even the PDL-1, high-population durvalumab and pembrolizumab arms were inferior to CHT in the first 9 to 12 months of follow-up and could not statistically outperform CHT in the longer follow-up both in the DANUBE and KEYNOTE-361 phase-III trials. [17, 18]

The implementation of a cytotoxic T-lymphocyteassociated protein-4 (CTLA-4) inhibitor plus an anti-PD-1 antibody in first-line trial designs failed to demonstrate an improved OS over classic platinumbased CHT, as reported by the DANUBE trial with the combination of durvalumab and tremelimumab. [18] Overall response rates (ORR) were lower in the durvalumab/tremelimumab combination (36%) compared to CHT (49%) and roughly equal (47 vs. 48%) in the PDL-1-high population. The results from CheckMate-901, which investigated ipilimumab and nivolumab in a three-arm design, are still anticipated. The doses of the CTLA4/PD-1 combination in this trial were chosen as approved for melanoma (Ipilimumab 3 mg/kg, Nivolumab 1 mg/ kg), since data from the phase-II study [19] in platinum pre-treated patients was encouraging for the higher Ipilimumab dose and is thus more toxic while mUC patients tend to be more frail.

Switch to maintenance instead of sequencing
Prof. Powles and colleagues presented an OS of 21.4 months (HR 0.69 (95% CI: 0.56, 0.86)), the longest ever reported in a first-line phase-III trial in advanced or metastatic UC, at the ASCO meeting only a year ago [6], of note, with patients having responded on first-line platinum-based chemotherapy. The JAVELIN-Bladder 100 phase-III trial investigated the efficacy of maintenance with anti-PDL-1 inhibition with Avelumab plus best supportive care (BSC) or BSC alone in patients not progressing during four to six cycles of platinum-based CHT (either cisplatin or carboplatin). Most subgroups were in favour of Avelumab + BSC. Moreover, quality of life did not decline in the Avelumab + BSC arm. [20]

This data leads to a change in the terminology of selection criteria of first-line treatment choice from cisplatin-eligible to CHT-ineligible since the OS benefit was shown to be independent of cisplatin or carboplatin-based CHT. Important to note, though, is that cisplatin remains the standard choice over carboplatin in cisplatin-eligible patients. Hence, the JAVELIN Bladder 100 data resulted in the immediate implementation of the maintenance strategy in the EAU and ESMO guidelines for first-linechemotherapy- fit patients with a category-IA recommendation. Avelumab has been approved by both the Food and Drug Administration (FDA) and the EMA. The number of platinum-based CHT cycles needed will be another interesting field for investigation since a post-hoc analysis presented by Prof. Loriot at ASCO GU 2021 demonstrated noninferiority of four versus six cycles. [21]

What is the role of immunotherapy in histologic variants?
All reported trials on immune-oncology drugs allowed patients with a partial component of histologic variants to be enrolled, predominant or pure variants excluded. The primary location of urothelial cancer was not restricted to the bladder, therefore recommendations and guidelines also apply to upper tract metastatic tumours.

Biomarkers for immunotherapy in advanced or mUC
PDL-1 has not been established as a predictive biomarker for response in second-line treatment but seems to have an impact on PFS with anti- PDL-1 treatment in first-line cisplatin-ineligible patients. More precisely, we have convincing results that PDL-1 negative patients are at risk of rapid progression if treated with CPI. Other approaches to identify biomarkers include circulating tumour DNA (ctDNA). The results from an exploratory analysis of the IMvigor010 trial were encouraging for ctDNA in patients that derive the most benefit from adjuvant atezolizumab after cystectomy. The trial itself did not reach its primary endpoint for the ITT population. [22] In mUC, ctDNA has been reported as predictive for response to anti-PD-1/PDL-1 antibodies in small subsets of patients in retrospective analyses. [23-25]

Future outlook for immunotherapy in advanced and mUC
Strategies based on immunotherapy in the first-line setting, either in combination or as a monotherapy, have not shown convincing OS benefits so far, although positive results for the PDL-1 positive subgroup have been reported in the exploratory analysis of IMVigor 130. Therefore, there might be a subgroup of patients benefiting from this approach, and further investigating these patient subgroups remains crucial. Second-line treatment with anti-PDL-1/PD-1 antibodies improves survival compared to CHT; however, it might be too late for most patients who are faced with progression after first-line CHT. Therefore, a maintenance strategy with avelumab for patients without progression during initial platinum-based CHT has achieved the highest level of evidence and thus has to be regarded as the standard of care.

Numerous trials continue to investigate the future role of immuno-oncology drugs, in combination with emerging drugs and conventional CHT (see table 1), in advanced and metastatic UC. This will soon shed light on the as yet unanswered questions. 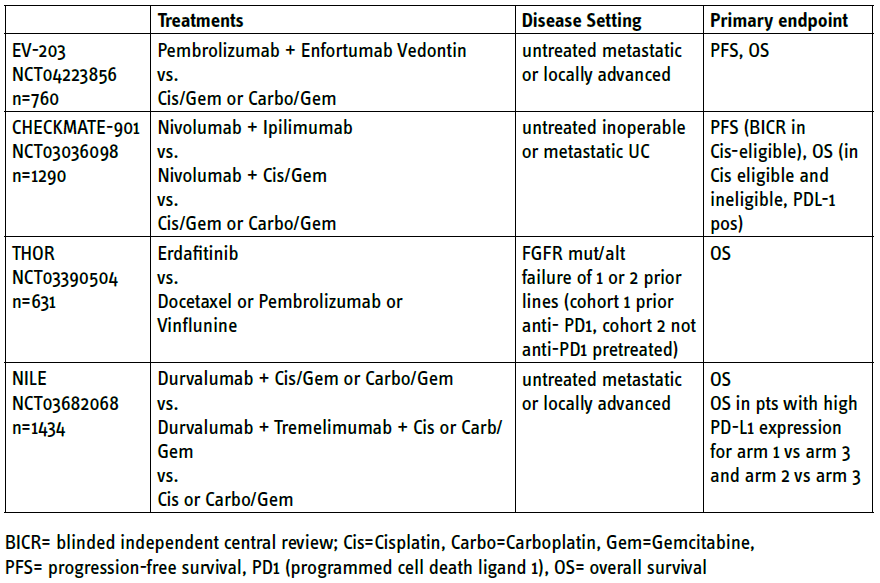 Table 1: Phase-III trials including immunotherapy (anti-PDL-1 or anti-CTLA4) in metastatic or advanced urothelial cancer (recruiting, data not yet reported as of 05.2021)