This article reflects the highlights of the lecture Dr. Boeri gave at the EAU20 Virtual Congress on Friday 17 July. His presentation can be found in the EAU20 Resource Centre.

The infertile man may be a lucky man. This seems a crazy opening statement, but I can explain. It is common knowledge that infertility is a major health care problem that affects nearly 15% of all couples worldwide. A male factor (MFI) is recognised in about half of the cases. These data gain even more importance when we consider the evidence of an intertwined link between MFI and the overall health status.

In the last two decades, several studies have shown that infertile men are ‘less healthy’ individuals compared to their fertile counterparts. Metabolic and cardiovascular disorders, autoimmune diseases, endocrinopathies, and tumours have been consistently found to be more prevalent in infertile than fertile controls of comparable age. Even more crucial, large population studies suggested a higher overall mortality risk for patients affected by MFI. Quantitative measures of the overall health status have recently been linked directly to seminal parameters alterations.

However, the pathophysiological mechanisms supporting the huge amount of evidences depicting infertile men as ‘less healthy’ are yet unidentified. So, why should we consider infertile men as ‘lucky’ if they carry such a burden of comorbidities? First, let’s explore the risky background of the infertile man. 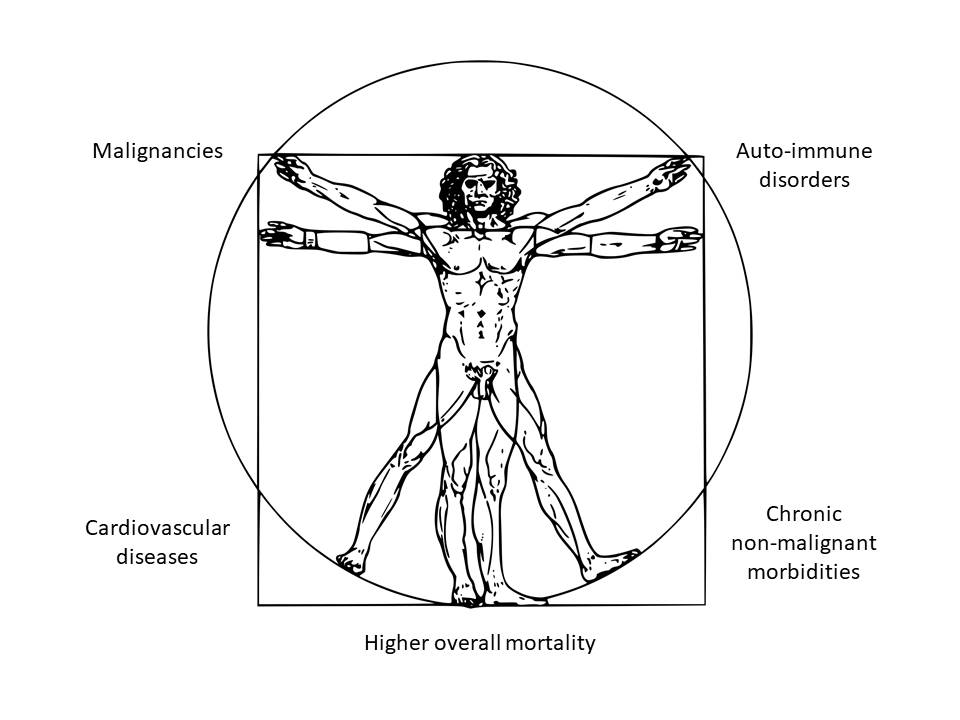 Men with abnormal semen analyses have been associated with a greater incidence of testicular cancer, colorectal cancer, and melanoma than their counterparts in the general population.

In a multicentre study including 51,461 couples recruited from 15 centres in California, Walsh et al. assessed the incidence of testicular cancer among male partners and compared results with data from the SEER database. They showed that patients with MFI had a three-fold higher risk of testis cancer as compared to fertile men. More solid evidence comes from population-based cohort studies. Raman et al. linked 3,800 men with infertility and abnormal semen parameters to regional cancer registries in order to retrospectively assess the incidence of testicular cancers among patients with MFI. The authors found a 20-fold higher risk of testicular cancer among infertile men compared to the general population.

Debate
The association between MFI and subsequent risk of developing prostate cancer is under debate. Walsh et al., in a population-based study of 22,562 infertile men, reported that men with MFI were 2.6 times more likely to develop a high-grade prostate cancer (PCa) than their age-matched controls. Similarly, Eisenberg et al., in a large study including 76,083 infertile men, reported a two-fold higher risk of PCa compared to a control population. On the contrary, others failed to find an association between MFI and an increased risk of PCa.

Apart from urogenital malignancies, other types of cancer are associated with MFI. Eisenberg et al. used commercial insurance claim data to compare a cohort of 76,000 infertile men with an age-matched control group of 112,000 vasectomised men that were presumed to be fertile. They found that patients with MFI showed a 49% higher risk of being subsequently diagnosed with any cancer as compared to fertile male thus considering melanoma, prostate, testis and bladder cancer, as well as haematological malignancies.

Metabolic and cardiovascular diseases
The impact of metabolic disorders (obesity, insulin resistance) on semen quality and male reproductive function has been widely investigated. Recent evidence has also highlighted the inverse relationship between MFI and the development of metabolic abnormalities. Glazer et al. performed a large prospective trial including 39,516 subjects from the Danish national IVF register to look at the risk of further developing diabetes mellitus (DM). They found that 1.6% of men developed DM throughout follow-up. The risk was significantly higher for patients with oligospermia (HR 1.44; 95% CI:1.01-2.06), azoospermia (HR 2.10; 95% CI:1.25-3.56), and aspermia (HR 3.20; 95% CI:1.00-10.31) compared to fertile men.

Overall health, mortality, and male infertility
Salonia et al. were among the first to investigate the association between MFI and overall men’s health. They used the Charlson Comorbidity Index (CCI) to objectively quantify the burden of patients’ comorbidities. They showed that infertile men had significantly higher CCI scores compared to control groups, thus depicting a lower overall health. These findings were corroborated by subsequent studies where sperm concentration was found to be inversely associated with increasing CCI score. Interestingly, longitudinal studies confirmed the association between comorbidities and MFI. Data from the Marketscan claim dataset showed that among 13,027 infertile men, the risk of developing subsequent comorbidities was significantly higher compared to 23,860 controls. The risks of cardiovascular disorders and diabetes was significantly higher in infertile than fertile men.

Overall mortality
Male infertility has also been associated with overall mortality. A Danish population-based study analysed data from 43,277 men submitted to semen analysis evaluation between 1963 and 2001. The total mortality and cause-specific mortality of this cohort were compared with data from an age-matched population. The authors reported that, among patients without azoospermia, there was a decrease in the risk of mortality as the semen concentration increased up to 40 x 106/mL. Similarly, a decrease in mortality was associated with better semen motility and morphology. Causes of death included infectious diseases, cancer, cardiovascular disorders, respiratory diseases, and gastro-intestinal diseases.

Reasons remain unclear
‘Why are infertile men characterised by this huge amount of comorbid conditions?’ you may ask. In fact, the pathophysiological mechanism underlying the association between MFI and lower overall health is not clear yet. Various theories have been proposed.

Genetic and environmental factors have been implicated in the relationship between MFI and cancer. Mutations in the SRY gene on the Y-chromosome have been associated with both gonadal dysgenesis and testicular cancer. Similarly, defects in DNA repair genes may be responsible for chronic oxidative stress causing semen alterations and could at the same time be associated with several cancer types. Microdeletions of the Y-chromosome are an established cause of MFI. And differential expression patterns of the Y chromosome genes have been associated with PCa. Aberrant epigenetic events affecting DNA hypo and hyper-methylation have been associated with decreased semen concentration, morphology and motility, but similar mechanisms are known to be involved in the development of different types of cancer as well. Finally, shared risk factors such as smoking and obesity may contribute to the development of both infertility and cancer.

“Data depicts MFI as a proxy of overall men’s health. So why should infertile men be considered lucky?”

A dysregulation of the hormonal environment may be a common path between cardiovascular disorders and MFI. Low testosterone levels have been widely associated with a higher risk of developing cardiovascular diseases, suggesting that testicular failure could be responsible for cardiac alterations among infertile men. These data depicts MFI as a proxy of overall men’s health. So why should infertile men be considered lucky?

Recently, Corona et al. proposed the concept of the impotent patient as a lucky man, because he has the chance to undergo certain kinds of medical examinations which may improve not only his sexual life but his health as well.

Comprehensive medical assessment
Similarly, we believe that infertile men are lucky because MFI should be considered as an ‘opportunity’ for a comprehensive medical assessment to check for comorbid conditions and to improve health status. This means that treating infertile men does not revolve around mere reproduction, but should be focussed on general health status, since relevant comorbidities might influence not only his fertility, but his life expectancy as well.

It is, therefore, fundamental to properly outline the presence of coexisting diseases during the male infertility work-up, since these may turn out to be of fundamental importance in terms of etiologic assessment, therapeutic choice, and paternity outcomes. At the same time, clinicians should be aware of the need to properly follow-up these patients given their higher risk of developing cancer. The increasing knowledge and awareness of the comorbidities-infertility interaction will provide precious insights in terms of patient care and future therapeutic developments.