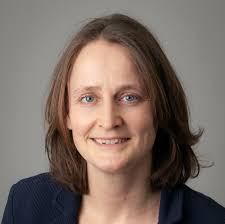 This article reflects the highlights of the lecture Dr. Van Der Zwaag gave at the EAU20 Virtual Congress on Sunday 19 July. Her presentation can be found in the EAU20 Resource Centre.

7T MRI is a game changer for MRI. The higher signal strength as a result of the stronger magnetic field can be used to generate higher resolution images. It also boosts sensitivity to the brain function, opening up the possibility of investigating the brain function in individuals rather than groups and the visualization of very small functional units, such as the regions that control pelvic floor muscle contractions.

Magnetic resonance imaging (MRI) is a frequently used tool in the modern clinic. Ultra-high field (UHF) MRI systems, which contain a magnet with a field strength of 7 Tesla or higher, are relatively rare compared with the standard 1.5T or 3T systems mostly used in clinical practice.

The most important advantage of higher field strength is the increase in signal-to-noise ratio (SNR), which can be used in prostate imaging to better visualize tumour growth, for example (Steensma et al. 2019). An additional advantage of using UHF systems is the much higher sensitivity to the changes observed during functional MRI scans. The ‘BOLD signal,’ which stands for Blood Oxygen Level Dependent signal, scales approximately linear with the magnetic field strength (van der Zwaag et al. 2009).

This means that a functional experiment looking at a 1 percent signal change at 3T can be expected to yield a 2.3 percent signal change at 7T. In addition, that signal change is measured with higher signal to noise ratio, leading to very greatly increased detection power. This can be traded for increased spatial resolution or significantly reduced scan times. Hence, UHF has been a real game changer for cognitive neuroimaging, opening avenues to functionally imaging the columns and layers within our cortices (Polimeni et al. 2010; van der Zwaag et al. 2018) and imaging very small, functional units (van der Zwaag et al. 2013, see figure 1), while also enabling reliable measures of brain function within a very small number of subjects, or even a single subject (van Es, et al. 2019), which can lead the way to measures of brain function in individual patients. 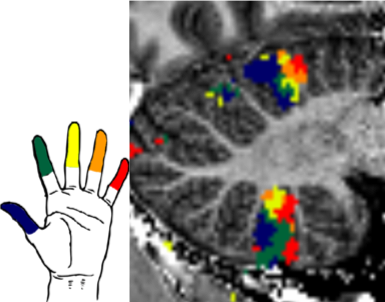 Functional brain responses
First, we investigated the functional brain responses to a pelvic floor muscle contraction task in men (Groenendijk et al. 2020). In this study, we demonstrated that UHF fMRI can visualise the neural representations of the male pelvic floor in the whole brain of a single subject. The subjects, all healthy volunteers, executed two motor tasks, one involving consecutive pelvic floor muscle contractions (PFMC) and a control task with tongue movements. The tongue forms a good reference area to map, because it is also part of the digestive tract; plus, the tongue is necessary for speaking and chewing; both highly conditioned tasks, much like PFMC in daily life.

Genital sensation
In the second study (Luijten et al. 2020), we investigated the brain responses of male genital sensation. We acquired high-resolution whole-brain neural representations of genital touch at both single subject and group level. Subjects underwent bilateral tactile stimulation of the penile shaft and, as a control, of the feet. Tactile stimulation of the penile shaft evoked significant activation in the primary and secondary somatosensory cortices (S1 & S2), ventral premotor cortex, posterior and anterior insula, posterior midcingulate gyrus, medial prefrontal cortex, thalamus, and cerebellum. Tactile stimulation of the feet evoked significant activations in S1, S2, posterior insula, thalamus, and cerebellum (see figure 2). Our results clearly indicate that the genitalia are represented in the hip region and not below the feet in S1 as depicted in the original sensory homunculus. Furthermore, tactile genital input activates brain regions implicated in processing both discriminative and affective aspects of touch, whereas tactile input from the feet activates mostly discriminative regions. 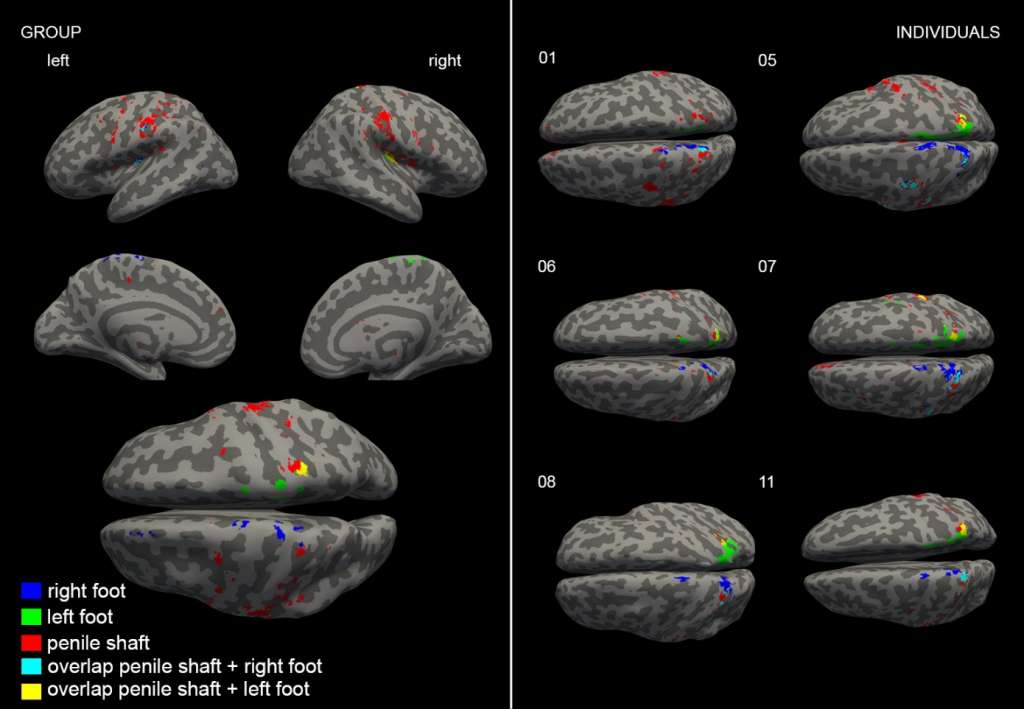 Whole-body map
Combining information from the two studies, we see that e.g. in the cerebellum, a whole-body map forms in the anterior lobe, where the penile shaft representation fits neatly on the line roughly from feet to tongue representation. Note that in the cerebellum, tactile and motor responses are expected to yield BOLD responses in the same locations and can hence be combined in a single map.

These data provide us with the layout of relevant body areas in the somatotopic maps of the human brain (see figure 3). Changes in these areas or their responsivity, which may occur in clinical patients (Serino et al. 2017), can then be investigated. What makes Ultra High Field MRI so powerful is that these changes can be observed in a very small number of patients, or even in a single individual, potentially allowing classification of treatment options (van Waarde et al. 2015) or follow-up of treatment success. 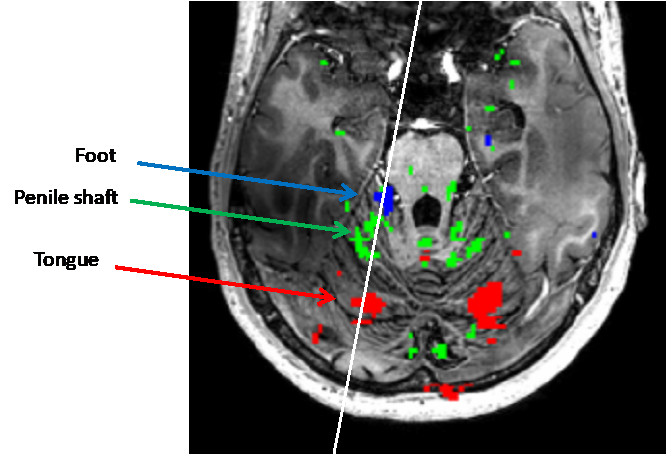 Figure 3: The layout of relevant body areas in the somatotopic maps of the human brain