The EAU Specialty Sessions “Controversies on EAU Guidelines” I and II addressed certain controversies that come with a medical resource such as the EAU Guidelines. “The EAU Guidelines are really important,” Prof. Arnulf Stenzl (DE) said in his introduction, “and form the basis for our daily clinical work. But sometimes this work requires us to go outside the Guidelines.” Six controversies were addressed in the form of moderated debates, with speakers presenting their case followed by a discussion.

The first debate addressed the question “standard transurethral resection of the bladder (TURB), office fulguration or active surveillance (AS) for a small papillary recurrence in the bladder?”. Prof. Dr. Marek Babjuk (CZ) presented the case for this debate, see figure 1. 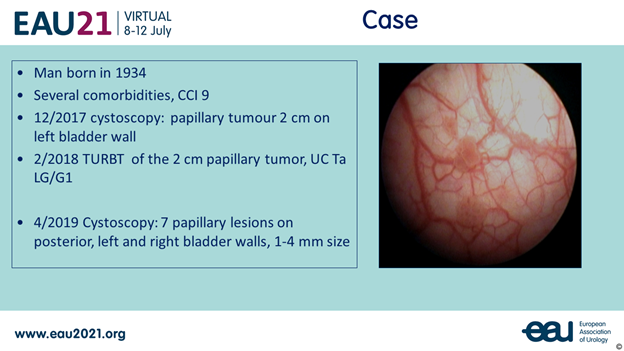 Prof. Dr. Maximilian Burger (DE) was the first giving his presentation, arguing for performing a TURB. “Any other approach is insufficient,” he said. “Any other approach is intuition. The EAU Guidelines recommend TURB. Stay on the safe side, stay on the side of the EAU Guidelines.” The only con against carrying out a TURB in this case is the surgical risk, he stated. “But really? A surgical risk for a properly done TURB? No. If you really stick to the rules as defined by the EAU Guidelines, you should be doing okay, and I would not be worried. I do want to state clearly, though: no radical TURB is needed in this case.”

Prof. Joan Palou (ES) advocated an office fulguration, which would spare the patient from an unnecessary anaesthesia. He also pointed out the efficiency, citing decreasing medical costs in comparison with a TURB, the reduction of staff requirements, and the use of fewer hospital beds.

Prof. Shahrokh Shariat (AT) put forward AS as the best option. “A low-grade, papillary bladder tumour (TaLG) is a favourable prognosis. It often shows a frequent recurrence but with a low growth rate and a very rare progression. And TaLG can be accurately identified by visual appearance.” He also took into account that “most bladder cancer patients are elderly and frail”, including the patient described in figure 1. As a result, Prof. Shariat prioritises quality of life.

Prof. Dr. Ashish Kamat (US) joined the session to give the final verdict, even though the clock struck 3 AM in his time zone. He said that each approach has its pros and cons (see figure 2), but that in this case AS would be the best option considering the age of the patient, with a life expectancy of less than 1.4 years. 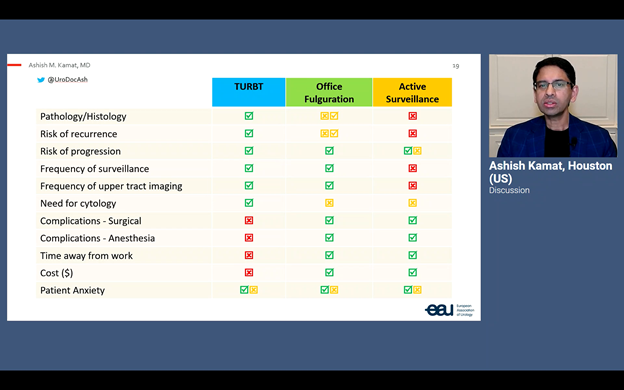 Figure 2: The pros and cons of TURB, office fulguration, and active surveillance for a small papillary recurrence in the bladder

Common ground
The topics that followed, flexible ureterorenoscopy or imaging for upper tract urothelial cancer, follow-up of stone formers, small renal mass, and high-risk non-seminoma CS1, provided insightful discussions with points of view from all sides. Common ground was always found, for instance in the discussion of whether a follow-up of stone formers is important or not. Whereas their presentations were entitled with a firm ‘yes’ (Dr. Kay Thomas, GB) and ‘no’ (Mr. Niall Davis, IE), when confronted with a specific case of a 42-year-old woman (see figure 3) the two agreed on monitoring this patient.

The final debate concerned the best surgical technique for delayed or refractory ischaemic priapism. In 2021, the EAU Guidelines panel on male sexual and reproductive health published contemporary guidance in this controversial and challenging area. Prof. Ates Kadioglu (TR) gave his point of view on the use of conventional shunts, Prof. Carlo Bettocchi (IT) on novel shunts and penile decompression, and Prof. Dr. Juan Ignacio Martínez Salamanca (ES) on penile prostheses. With each technique having its specific pros and cons in specific situations, the discussion section led by Prof. Andrea Salonia (IT) did not reach a definitive conclusion.

Over the course of the day, this and all other debates will be available for (re)watching in the On Demand feature on the EAU21 Virtual Platform in the full recordings of both sessions. Check it out and draw your own conclusions!

What we know about outpatient surgery in Europe