This article reflects the highlights of the lecture Mr. Tim O’Brien gave at the EAU20 Virtual Congress on Sunday 19 July. His presentation can be found in the EAU20 Resource Centre.

Urological surgery presents fascinating diverse challenges, not least in the anatomical size of those challenges, ranging from the micro-surgery of vasovasostomy to resection of 25 cm diameter kidney tumours or retroperitoneal nodes. Precision is required for both but precision of a very different nature. This talk sets out some principles for this macro-precision!

There is no definition for what constitutes ‘very large’ and one principle to set out right at the start would be that size alone is an imperfect predictor of difficulty. A 20 cm diameter smooth walled renal cystic mass would generally be a far more straightforward proposition than a 12 cm mass with a blocked left renal vein and local infiltration of psoas and the tail of the pancreas. For the purpose of the talk and this article we will consider masses to be very large if for whatever reason they are being considered for open surgical removal.

Multiple skilled surgeons
In a talk that majors on the technical, i.e. tips and tricks, I make no apology for the first lessons to be non-technical. They are critical. Planning is paramount. These are not solo operations or operations to be performed with junior assistance. More than one skilled surgeon is required. In 2020, there are no straightforward ‘open’ procedures (all of those are done laparoscopic or robotic), so if it’s being done open, it is difficult. The requirement for multiple skilled surgeons is for 3 reasons. Firstly, the manoeuvring of the mass by the assistant to display anatomy and aid dissection is critical to that dissection and requires skill, judgement, and experience. In the operations in which I am the nominated lead, I will most often be that individual, i.e. the first assistant, because the display and the manoeuvring becomes the key role. Secondly, the most feared and most likely intra-operative complication is heavy bleeding. This is role and time critical, stressful, and requires experience to resolve successfully. Thirdly, the operations can be lengthy. The maintenance of super-intense levels of concentration over 4-5 hours is well-nigh impossible. Mental fatigue leading to impaired physical performance sets in. Sharing the load by generating an ‘ebb and a flow’ whereby surgeons take turns ‘facing the bowling’ really helps.

Teamwork
A second key element of preparation relates to team. Smooth effortless teamwork only comes with consistent periods of working together, and not all surgeons pair well together. Ryder cup captains know that not all pairings work and surgeons need to, too. Good assistants anticipate the next move, no questions or instructions need to be given.

Create a plan
A third final element of preparation relates to creating a plan. Review of the imaging is critical and needs to involve the surgical team and radiologists who understand the surgical challenge. There is no place for bland generic radiological reports. This review often relates to the status and management of the adjacent structures, numbers of renal arteries, state of the veins, collaterals, and proximity of iliac blood vessels. A key question is: are the adjacent structures compressed by the mass or infiltrated by it? These may be ‘game changing’ findings such as involvement of the SMA/coeliac trunk, direct infiltration of the liver, or infiltration around the head of the pancreas/duodenum. These are all rare but only by reviewing the imaging with radiologists who understand the surgical challenge will good decisions be made.

Embolisation
Should the patient undergo embolisation of the mass pre-procedure? Usually no, as early ligation of the renal artery is feasible in most cases. However, in situations where the renal artery is deep within a nodal mass (see figure 1) and the renal vein is obstructed, then pre-procedure arterial embolization can help reduce bleeding. In our unit, the patient is transferred to interventional radiology at 08.30 am and undergoes embolisation under general anaesthesia before transfer to the operating theatre at approximately 11.00 am for nephrectomy. Embolisation under local anaesthesia is painful and embolisation in the days running up to a nephrectomy should be avoided as it can generate an inflammatory SIRS syndrome. 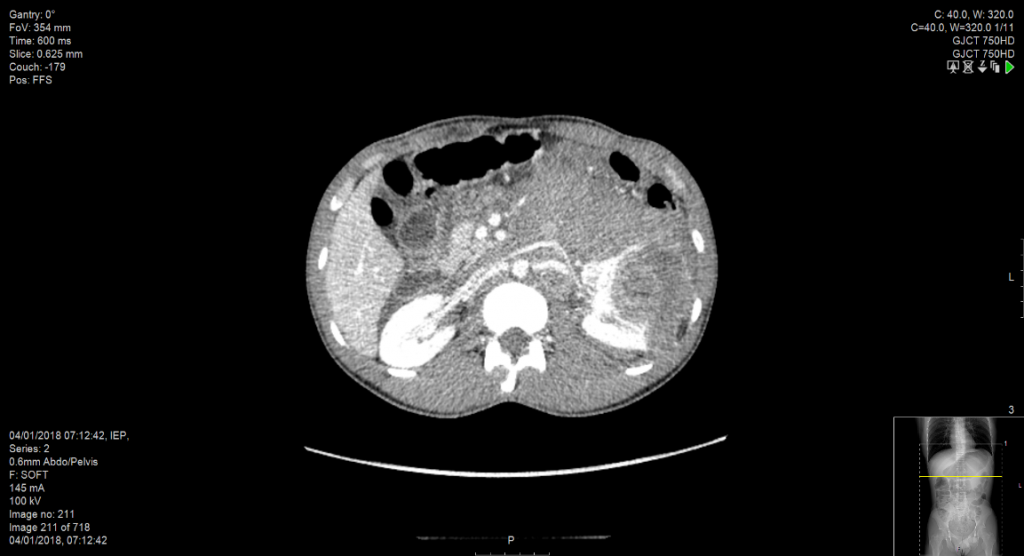 Figure 1: Obliteration of the left para-aortic space by lymph node and haematoma

Incisions
The operations are done supine. Incisions are chosen which guarantee good access. We favour reverse L and Mercedes incisions (see figure 2 a-c). Midline incisions restrict access laterally making it more difficult to dissect the right lobe of the liver or the splenic hilum / tail of pancreas. If patients have had pelvic surgery, then long midline incisions (with lateral extensions) can allow accurate dissection of pelvic adhesions to the small bowel. The Thompson abdominal retractor gives superb access to the upper abdomen (see figure 3). 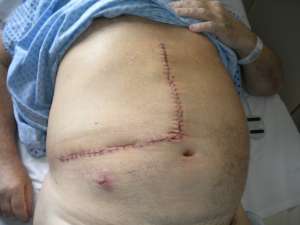 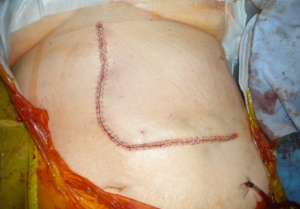 Ligation of the renal artery
This is the crucial first step in these operations as it minimises blood loss from the collaterals in the periphery of the dissection. It is best done flush with the aorta i.e. to the left of the inferior vena cava (ivc) for a right sided tumour (see figure 4). Dissection of the colon and reflection of the colon and the small bowel is unnecessary at this point. The 4th part of the duodenum is simply reflected to the right; off the anterior wall of the aorta, the dissection continues cephalad flush with anterior wall of the aorta – and the left renal vein is identified. Dissection under this allows identification of the renal artery at its origin. In our hands, this step takes fifteen to twenty minutes and saves on average 1000 ml of blood loss per case. The renal artery is not divided at this point as exposure is better later in the operation. Ligation of the artery flush with the aorta also mitigates the problems that can arise from incomplete control due to early branching of the artery. 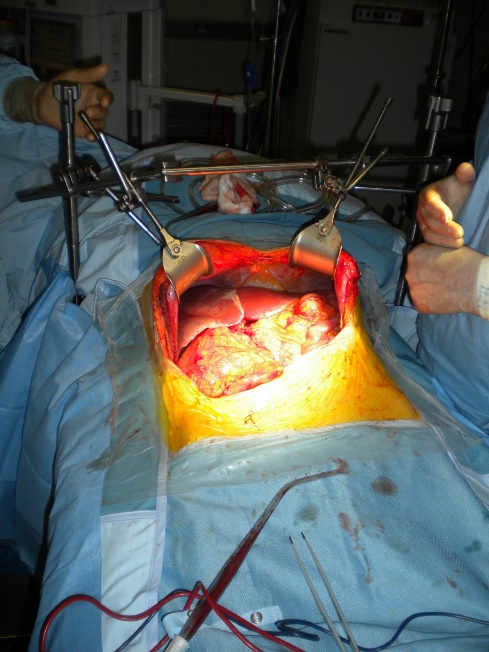 Lower pole
Peripheral dissection and dissection of lower pole is done with cautery on 40 w and releases the lateral peritoneal attachments. In right-sided dissection, division of the ligament of Treitz, mobilisation of the colon, and small bowel is done at this point. This exposes the ivc. Safe dissection is possible flush with the ivc’s anterior surface. With exposure of the great vessels to define the medial danger, exposure of the common iliac artery to define the inferior danger, and lateral peritoneal release, control and division of the gonadal vein and ureter is then possible. Care is required to avoid damage to the common iliac artery if the mass is very large and arising from the lower pole. These steps allow release of the inferior attachments and posterior dissection is undertaken very straightforwardly. 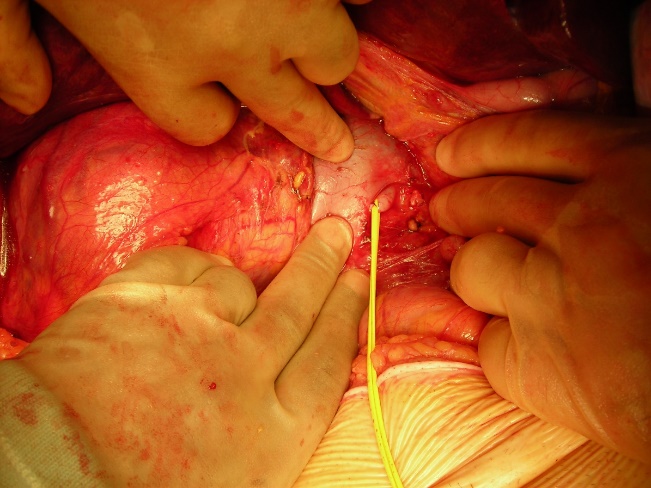 Figure 4: Early ligation of the right renal artery to the left of the ivc

Upper pole
For peripheral dissection and dissection of the upper pole, the splenic or hepatic flexure is released using diathermy and Liga clips to expose the upper pole mass. Decisions at this point are needed about the need for full mobilisation of the right hepatic lobe or spleen and tail of pancreas. If bleeding from splenic capsular tears occurs, it can usually be controlled by applications of pro-coagulants such as floseal. Deep tears may require splenectomy. The plane between the pancreas and the adrenal is usually well preserved. Infiltration of the tail of the pancreas can be managed by distal pancreatectomy and splenectomy. The pancreas can be stapled or overseen with 3/0 prolene. The adrenal is taken en bloc. Dissection of the mass off the diaphragm can be very difficult. It is best done with diathermy. Venous bleeding can be intense and is best sutured with 2/0 vicryl figure of 8 sutures. Safe dissection of the upper pole requires exposure of the medial vascular structures, aorta on left, and ivc on right. The key supero-medial venous structure on the right is the right adrenal vein which can bleed ferociously. It is best controlled by Liga clips and once divided bleeding from other structures is rarely problematic.

Mobilisation of the liver
Large masses often invade the renal vein and/or ivc. Mobilisation of the liver allows exposure of 10 cm of ivc behind the liver. Two elements may be required. Mobilisation of the caudate lobe off the front wall of the ivc requires control of small communicating veins by fine ligatures or Liga clips (see figure 5a). If the caudate lode is wrapped around the ivc, this step can be very tricky. If tumour extends higher in the ivc or if the tumour mass invades the diaphragm or adrenal then full mobilisation of the right lobe of the liver is required (see figure 5b). Diathermy dissection suffices and major bleeding is rare as the bare area is dissected free. If bleeding from the liver is encountered then 4 steps may help: the application of the argon beam coagulator, floseal or other procoagulants, compression of liver lobes after further dissection, and suture ligation with prolene. A pringle manoeuvre can help reduce bleeding if visualization is difficult. If bleeding continues, placement of a swab and compression for 10 minutes will often suffice. 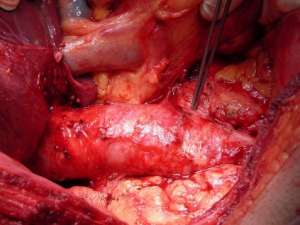 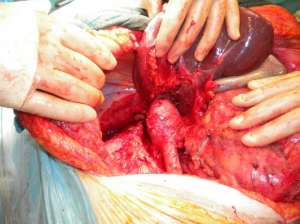 Control and division of renal vessels
We avoid ligation of the renal vein until we are sure we have controlled all the renal arterial supply. Ligation of the renal vein with less than perfect arterial control can lead to bleeding that is ferocious and very difficult to control. A short right renal vein may mean control of the caval side is best achieved with a side-biter ‘mini satinsky’ allowing suture ligation of the ivc wall with 4/0 prolene. Standard triple ligation usually suffices on the left. A caution is that very large masses can weigh several kilograms and can avulse the renal vein from the ivc if the renal vein carries the whole weight of the mass. This has happened to us twice and is problematic. It is avoided by the assistant cradling the mass thus reducing tension on the vein and/or by leaving some fascial attachments to the mass in addition to the renal vein to share the weight of the mass.

Post-removal
We slow down at this point. The nephrectomy bed after removal of a large mass is extensive and raw. It is the small volume bleeding from periadrenal, pericaval, or posterior abdominal wall veins that may result in a return to theatre for bleeding later that night. Liga clips and 4/0 prolene sutures are often needed to secure these veins reliably. Floseal and fibrillar gauze is used as a routine. The diaphragm needs careful attention.

Post-operation care
All our patients are managed in high dependency areas post-procedure. Analgesia is provided by a pre-procedure single shot spinal block, a TAP block placed intraoperatively by the surgeon, a wound catheter and infusion of chirocaine, and PCA of morphine. Post-operative antibiotics are not given. Subcutaneous prophylactic low molecular weight heparin is started the day after surgery. Skin clips are removed after 2 weeks.

Very large renal masses test the physical and mental resolve of the patient and the surgeon. Disasters are possible but should be rare. Using the techniques outlined above, our return to theatre rate for bleeding is 0.3%, and overall mortality rate is under 1%.